With many businesses looking to move from on premises data warehouse environments to the cloud, the necessity for a comprehensive data warehouse automation tool which spans both is becoming clear.

With WhereScape RED, making the transition is easy. Not only is the environment in which developers work the same whether it is an on premises, cloud or indeed a hybrid data warehouse, but RED manages the transition, too. That’s just one aspect of what makes RED a complete data warehouse life-cycle management tool.

Where some confusion can come into play is when RED is compared with other tools used to build data warehouses; common ones which crop up include SSIS (SQL Integration Service), Informatica, Talend and Data Factory. Without taking anything away from these products, as they can in fact be used very successfully alongside a RED Data Warehouse, the major difference is that these are essentially ETL tools only.

They are primarily built for moving data, that’s their core function.

None of these alternate Data Warehousing tools you’re likely to encounter are designed specifically for creating, testing, deploying and managing an entire data warehouse environment, whether on premises, in the cloud or the increasingly popular option of a hybrid between both.

That’s a problem because while manipulating and moving data is undoubtedly a part of the process of creating and running a data warehouse, it’s only one of the components of the entire process. And by itself ETL isn’t going to deliver much value without a whole lot of other goodness.

More important by far is the transformation, workflow, deployment, documentation, impact analysis and source control. Check out the below diagram. This shows all the steps involved in the creation and operation of a data warehouse, complete with the multiple tools you’ll need at every phase. Every time you switch from one tool to another, it means more skills and experience are necessary in staff members. They have to become proficient in at least six different tool-sets. This also means you’ll have to purchase, license and maintain relationships with six vendors, an overhead which is worth noting. 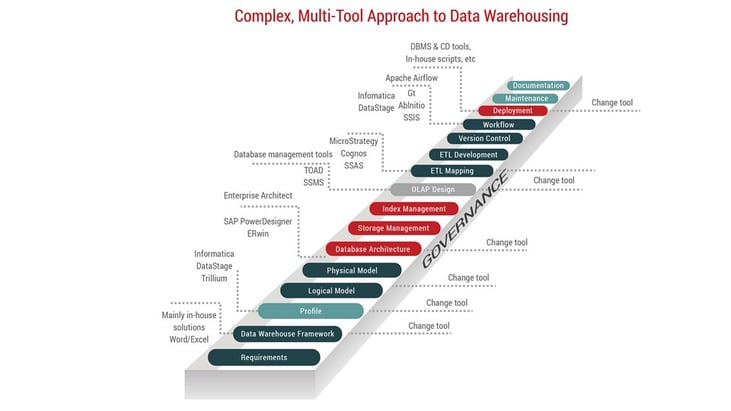 When you compare that to what the data warehouse life-cycle looks like when using WhereScape RED, the whole process is simplified: 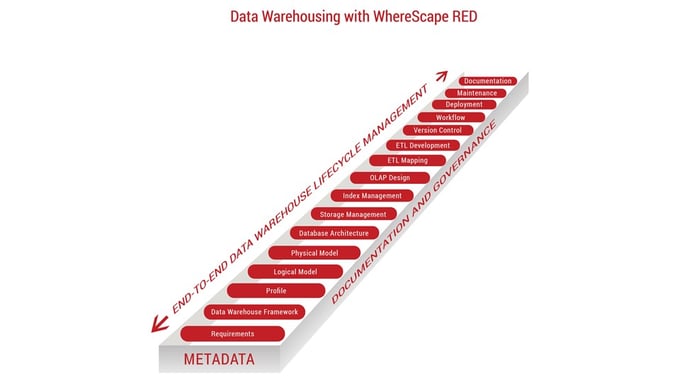 It’s for this reason that WhereScape RED is described as ‘data warehouse automation’, and not merely an ETL tool:

It even automates the production of documentation so you can easily keep track of data lineage.

Whether you’re giving a cloud data warehouse a crack for the first time, moving en masse into the cloud, operating a hybrid setup or even if you’re sticking with on premise, RED will do the lot for you.

In effect, WhereScape RED enhances the productivity of your development team, with one developer producing what would have previously taken a small team.

There are other benefits to having everything managed in one tool, the most significant being supportability.  If you’re manually managing the data warehouse life-cycle process across five different tools, what happens when one changes? With RED that process is managed for you and the transition between steps isn’t something you have to worry about any more.

The bottom line is simple. If you’re looking to capitalise on the new possibilities offered by cloud data warehousing, you don’t want to be wasting your time on simple life-cycle management tasks using five different tools.  Use one tool that’s built for purpose – WhereScape RED.