One ride, one cause, endless data

Each year, Qrious staff are granted a paid volunteer day to spend giving back to the community via their favourite charity. The COVID pandemic, while not what anyone wanted nor expected, has brought all of us here closer together to find new and creative ways to connect and support our chosen charities.

Take Qrious' BI Consultant Dave Mason, for example. Dave has thrown his support behind Cure Kids. The charity does a stellar job to raise awareness and funds for child health research to help improve, extend and save the lives of Kiwi kids living with serious illnesses and conditions.

What’s different is that, with Qrious’ backing, Dave has taken his contribution to a whole new level. A self-confessed cycling enthusiast, Dave has challenged himself to complete Tour Aotearoa, a mammoth 3,000km bike ride from the top of the North Island to the bottom of the South Island, to raise money for Cure Kids.

Dave Mason knows a thing or two about the power of data, in fact, he’s passionate about it. Day to day, he revels in helping clients leverage their data to generate invaluable business insights.

But Dave’s love affair with data doesn’t end there. A long-time cycling devotee, he uses data and technology in his biking adventures. Cycling highlights include biking the Yorkshire Dales and Lake District in England where he grew up and circumnavigating Lake Taupo multiple times since emigrating to New Zealand in 2010.

Dave had to slow down following the insertion of three heart stents in 2017 so he focused on ramping up his endurance, which included a 900km bike ride through Vietnam. Arguably, Dave’s next challenge is his most ambitious yet.

In preparation for the epic journey, Dave has ridden his second-hand, 10-year-old, steel Surly mountain bike off-road through Auckland’s Riverhead Forest, on the gravel roads around Puhoi and along Muriwai Beach on the wild west coast.

And he’s been collecting “quite a bit of data”. 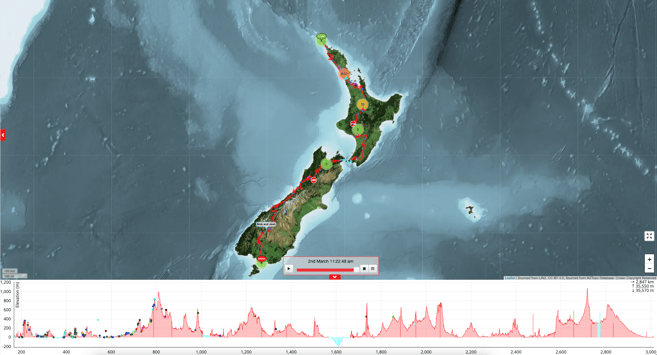 “For each ride, I collect data with a tool called STRAVA, which records my distance, time and speed, and maps my ride,” says Dave. “I have all of my rides from the last seven years mapped into this tool.”

Dave uses the information to monitor his performance and compare it to how he was in past weeks, months, even years. “For this event, I've upped my training so I've been doing about 1,000km per month for the last six months.”

This demanding training regimen recently “hit a bit of a roadblock” when his son came back from the Soundsplash festival with COVID. “I had to home isolate and wasn’t able to train outside for three weeks.”

But that didn’t stop Dave. He simply hooked up a computer to a wind trainer and rode non-stop in his garage for three weeks, capturing data each day.

Dave is quick to point out that the event isn’t a race. Instead, it is a self-supported ride that follows a set course, which riders must complete in 10 to 30 days – no more and no less.

“I plan to take 25 to 28 days,” says Dave. “There are no fixed check-in points, so I've been looking at the terrain of each stage and calculating distances and speed to work out the best place to stop each night.”

Dave will be carrying his tent, tools, spare parts and everything he needs for his four-week self-supported adventure, including technology.

“I will have a bike computer and a smartphone with a Spark Unlimited Plan. I have Topo maps and the route loaded onto my phone so I can use it as a GPS device and check where I am on the route,” says Dave.

“The mapping function is important because some of the routes will take me through some very remote areas. So, I will also be carrying a PLB [personal locator beacon] in case of emergency.”

The PLB sends GPS signals every five minutes, so Dave can be tracked via the Tour Aotearoa 2022 Map Progress website at any point in time. “That is almost real-time tracking. My wife will be able to see if I've stayed too long in the café!”

Relive is another exciting tool. “I can type in my ride data and it creates a video, a visual display of where I've ridden. It also attaches photographs along the route. I'll be uploading the data via smartphone and spectators can follow me.”

Dave will carry 15kg of gear, including a vital six litres of water. Days out from the start line, Dave is facing some tough decisions in terms of what’s in and what’s out. “Looking at the pile of things I want to take and how big the bags are... I’m not as obsessive as some but my wife did look at me rather strangely when I cut my toothbrush in half to save seven grams!”

The journey includes more than 33,600 metres of climbing and Dave will burn an estimated 121,000 calories. So he is planning a guilt-free meat pie review along the way.

There are 360 participants, with 90 departing the Cape each day to coincide with low tide on 90-Mile Beach. Tour Aotearoa is also a fundraiser for the rider’s selected charity.

“I chose Cure Kids as I have worked with them in the past to raise money on the Cure Kids Adventure Race. Cure Kids are very special as they undertake medical research to help save, extend and improve the lives of children diagnosed with serious life-impacting and life-limiting health conditions.”

Qrious was quick to throw its support behind Dave for this worthy cause. The company has given Dave a month off to complete the Tour Aotearoa and has pledged to make sure Dave reaches his goal of $10,000 – an update on this coming soon.

Donations to help Dave meet his fundraising goal can be made at www.justgiving.com/fundraising/dave-mason-ta-2022. You can track him in real-time via https://touraotearoa2022.maprogress.com.

Latest blog posts
Marketing
Using service messages for a consistent customer experience
Marketing
How iOS15 will impact your customer engagement
Marketing
The rise of TikTok: Insight and ideas for business