Who did it better - the Lions or Adele?

Who did it better - the Lions or Adele?

One of the services we provide our clients is a Point of Interest report that shows visitation for a particular area, such as Waiheke, or Queenstown Airport. We also have our Voyager product that provides visitor insights for tourism operators and local government organisations.

But, every now and then we get asked to provide insights for events, and this always tends to pique people's interest. We are somewhat guilty of seldom demonstrating what we do to our wider audiences, so a couple of months ago we asked ourselves, "why don't we publish some interesting facts regarding major events in New Zealand?" The timing couldn't have been better with the Lions tour coming our way. So I thought I'd demonstrate some recent analysis we did around visitation to the Lions Tour, and specifically, what country those visitors came from.

The New Zealand Herald picked up our analysis and ran a story that highlighted the huge uplift in international tourists seen in Wellington for the All Blacks vs Lions game.

Who came to see the games from overseas?

Using the data and clever algorithms behind our Voyager software, our analysis uncovered that UK and Australia were amongst the largest nations to attend the games, especially the two All Blacks games at Eden Park in Auckland.

We saw an 1,800% in UK visitors to the Eden Park vicinity on the All Blacks games days, and a 450% increase in visitors from Ireland. Interestingly, we discovered that the majority of UK and Ireland visitors did not arrive until after the Chief's game on 20th June 2017. A decent increase of Australian visitors can also be seen throughout the tour - one theory is that perhaps these were predominantly made up of UK and Irish expats living in Australia? 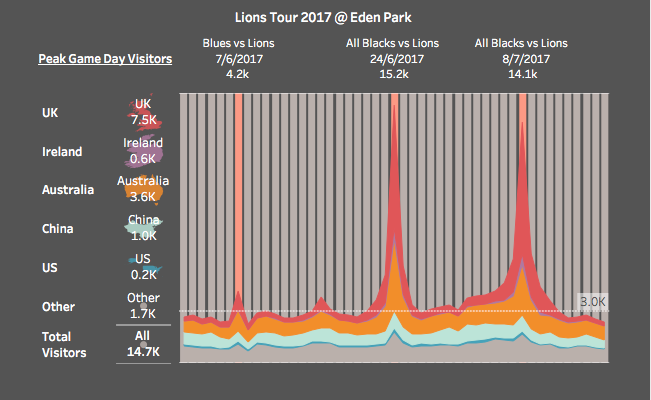 Did we see the same uplift for the Super Rugby team games compared to the All Blacks games?

We definitely saw a difference between nationalities attending the games, based on the nature of the team playing the Lions.

Using the three games held at Eden Park in Auckland, we were able to clearly see the less international interests at the Blues game, compared to the All Blacks games. And this is fairly understandable, given how popular the All Blacks are to rugby supporters around the world.

The Blues game was attended mostly by Kiwis (predominantly Aucklanders), with very little representation from the Lion's supporters. The Blues game was early on in the tour, and we saw the increase in international visitors later in the competition, so this makes sense. 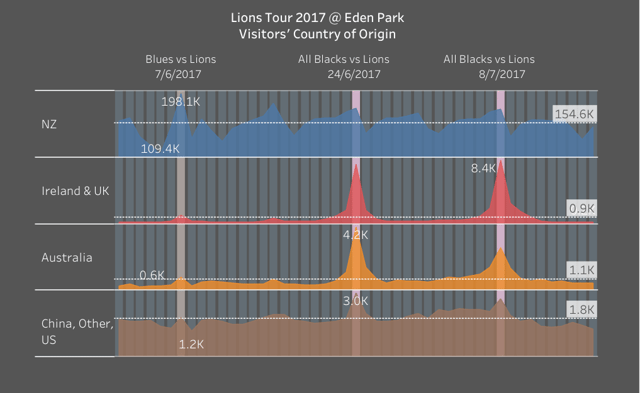 How did the Lions Tour stack up against Adele?

The Adele concert tour was without a doubt one huge success, with tickets selling out before I could swallow my morning coffee. We observed a 26% uplift in visitors for the first concert on the Thursday, and a combined 38% visitor uplift for the two concerts over the weekend. The majority of the concert goers were Kiwis (over 90%). 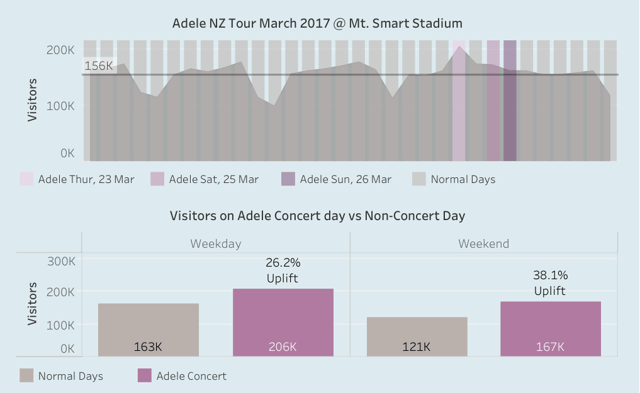 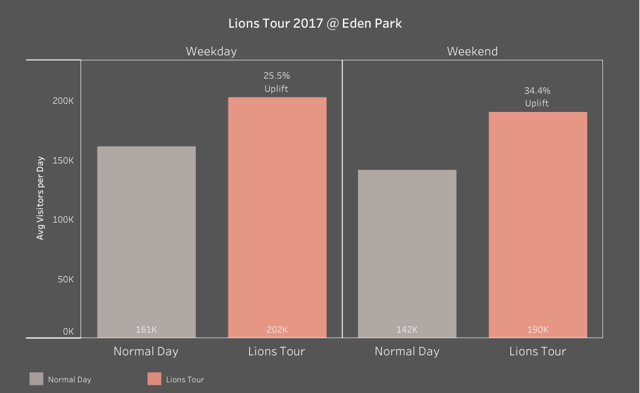 However, we may have to give this to Adele, who marginally beat the Lions Tour with her immense popularity. Both series of events were nonetheless amazing to watch. And no, I didn't make it along to an Adele concert or a Lions game, but I wish I had!